What: Analysing data with a data workflow, fast Java startup & csv Magic
Why: Building data analysis pipelines for (small) problems, where intermediate steps are automatically documented
How: Use Drake for (data) workflow management, Drip for fast JVM startup and csvkit for csv magic.

In this post, I will show you how to build a small data analysis pipeline for analysing the references of a wikipedia article (about data science). The result is the following simple image, all steps are automated and intermediate results are documented automatically. 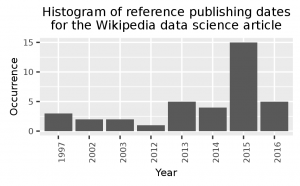 In the end, you should have four artifacts documenting your work:

You need the following tools:

You can install the dependencies easily with the script below. The following steps are tested within a Debian (Jessie) VM, 64bit. It should also work on Ubuntu. Maybe, other distros have to be adapted.

Drake is controlled by a so called Drakefile. Let us define three steps for the data processing:

The first step can be done with Linux internal tools. Thus, we can create the Drakefile with the first step already:

Drake takes input (mostly) from files and sends the output of each step again to files. Thus, the result of each step in a workflow is automatically documented.

This first step will download the html for the data science article from the german wikipedia and stores the html in a file called data.collect (the [-timecheck] avoids running the step each time drake is started because of missing input from previous steps). You can already run this workflow with the drake command:

This will generate a file called data.collect containing the html of the wikipedia page.

For data extraction from html, Python & BeautifulSoup is used. The extraction of the year from each reference can be done with linux internal tools (for example grep). Thus, the python program should read from stdin, get the reference text and outputs plain text to stdout. Create a file called extract.py with the following content:

Make the script file executable with:

You can test the script with the following command (If you ran the workflow from step 1 before):

Now, let us extend the Drakefile to use the python script, search for years with a regex, create a histogram by counting the occurrences of the years, reorder the columns and add a header:

If you run this workflow with:

a new file called data.extract will be created which looks like the following:

You can filter stupid dates out with csvsql (I really recommend this tool) from the csvkit tool suite by extending the Drakefile with some simple sql:

The final step is the plotting of the results. Let us create a R file, which reads from stdin and plots data to png. Create the file plot.R with the following content:

Make the script file executable with:

Now extend the Drakefile with the last step: Image creation. If Drake is run again, it is checking if the output of steps is already up to date by checking for files with the step name. Thus, the image file name and the step should match:

Again, run this step by executing the drake command.

You should now have three files for each of the workflow steps, where the last step file contains the image shown above.

What: Fast calculation on R data structures
Why: Performance
How: Use data tables instead of data frames

Some days ago I struggled with performance topics on R. Task was the analysis of a larger text corpus (~600MB english text). The preprocessing was finally done in Java (made the difference between unusable (R) and quiet fast (Java)). The analysis itself was possible in R after switching to data tables instead of data frames.

The followig snippet shows an example of calculating the mean on subgroups of the data:

Where to go next: Read this interesting blog post regarding data tables and performance. Also have a look at the fread function for reading in data. Also, have a look at other nice features of data tables like keys or assignment of columns.

What: Minimal lines of code for calculating the length of integer-sided right triangles with a side length below a given threshold
Why: Functional programming paradigm and vector handling in different languages
How: Write minimal examples for: Frege, Java, SQL, R, Python, Javascript. Please contribute!

Last week I went to a talk, where Frege was introduced. Frege is a purely functinal language based on Haskel. I once looked at Haskell and the introductory example was the famous pythogorean triples. Thats also mentioned on the Frege page. I was asking myself: How can this be done in Java, or R or SQL?

Here is my list of implementations. Please contribute if you know more or have a better (shorter) version. Line breaks are inserted for better layout. All implementations return something like:

This is not tested. I am not sure, what Frege says about the inserted line breaks.

For the Java version: Lets create a model class first. This makes the stream handling more easy. It is just some sugar.

You have to install Docker to run this tutorial. All dependencies are automatically installed in the container. Otherwise, you have to install the dependencies manually. Additionally, you need a browser to get access to Jupyter. The interactive plots work best in Chrome. I had some issues running it with firefox.

Copy the following content in a file called Dockerfile:

In the same directory, you need the file installJupyter.R with the following content:

Now, run the following two docker commands in the same directory where the docker file is located:

You should now have the running docker instance available on the docker VM, port 8888:

Via the „Upload“ button, upload the Notebook from here: Interactive graphs with Jupyter and R and open it. Execute all steps via „Cell“ -> „Run all“. Now, it should look like:

Did you noticed the interactive plot? You can zoom, export as png, have tooltips, … All without anything to programm. Cool, isn’t it?

Ok. Your customer is impressed but does not like the modern html stuff? He wants to print it out and send it away via mail? No problem. Just change the interactive plots to none-interactive ones and export to pdf via „File“ -> „Download as“ -> „PDF via Latex“ (that ’s why the docker file above contains all the stuff like pandoc, latex, …). You will get nearly publication ready report out.

What: OCR & R; Analyze standardized hardcopy forms electronically
Why: Win a card game with a lot of cards to remember (car quartett)
How

1. Setup a virtual machine or an existing linux

I used Ubuntu Xenial64bit. Maybe, you have to adapt the steps a little bit. You have to tweak the images a little bit to get good OCR results. Here is what I did:

The cards I scanned had some defined regions with numerical or text values (see figure above). You can enhance the OCR results dramatically, if you know ehere to look for the text. Create a small class containing the information about each region. This class should also contain a flag if you look for text or numerical values.

Set up the regions for your image as you like. Thats what I used for the cards (coordinates are pixels in the scanned image).

Now, process each image. For each image I did the following steps:

4. Analyze the results with R

You can read in the values easily in R with:

This is read in as a data frame. You can get a first impression of the best values with the summary function:

Write a simple function to get the values for all categories:

And voila: You have to remember just a few cards with the highest values. Next time I ask for „Zylinder“ in case Ihave the „Scania R620“.