What: Getting power production data in a real life photovoltaic system
Why: Use real data in modelling; Use mqtt to get sensor data
How: Use mqtt, csvkit and R to get and clean the data, use command line pipeline for data processing

This is the second part of my what-the-data hackathon series. Please visit also part one.

During the hackathon, the data were provided in json format with a timestamp. We collected data for nearly two days without serious interruption. My team was looking at the power production of the photovoltaic system. We decided to gather all the data as-is and write it to disk (we were expecting <100Mb of data). We used a small python script to get the data via mqtt. After the two days we collected 2.7Mb of data for the power production (and a lot more for other sensor data), which is approx. 58.000 entries like:

We needed the data for simulation, where we simulated energy transport in the system for each second. Most of the data were already timed at seconds, but some data points were missing due to sensor failures. Nevertheless, for our simulation we needed also values for these timepoints. Luckily, the sun shine doesn’t change too fast and a simple smoothing was enough to interpolate missing values.

We wanted to process the data with R and maybe other tools. We decided to convert the data to csv and process this further. Main points of the decision were:

We used the following bash script to strip of characters and convert the single entries to a proper json array (assume, the raw data is in the file pv_wirk.raw and has the format described above):

It does the following:

The output of the above command is piped into csvkit and converted from json to csv:

The data is now in the form:

With the data in a nice csv format, we used R to plot the data and interpolate it simply by using loess smoothing. Where data were missing, we imputed it with predicted values from the loess-fit. You can find the R script here.

The resulting image is shown below. The power still shows the natural fluctuations but also contains data for each second. 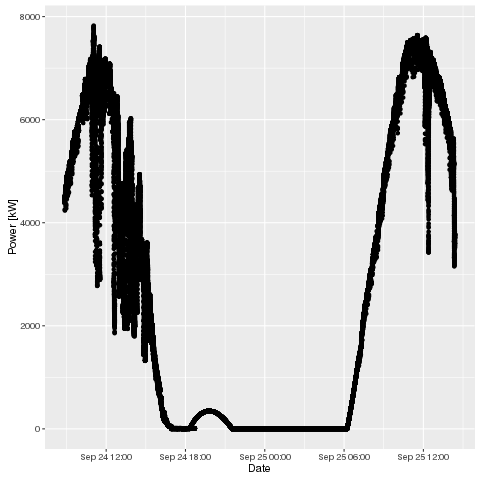